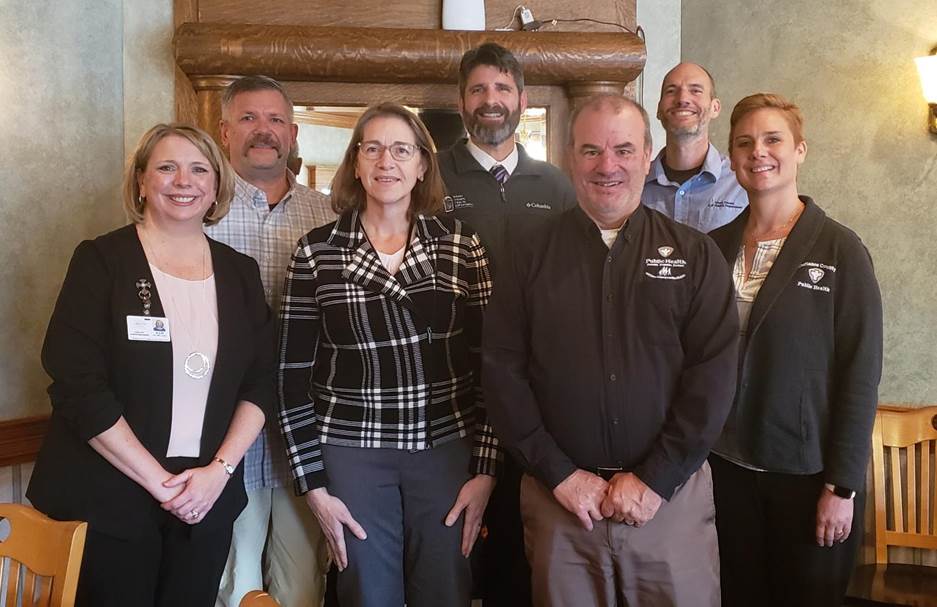 In 2011, when the Ohio Department of Health mandated that every local health department, in order to receive state funds, must be accredited by the Public Health Accreditation Board, public health practitioners across the state sprang into action.

At that time, six county health departments in the largely rural northwestern corner of the state, self-dubbed the “6-pact,” had been working closely together for several years. The counties varied widely in size, with populations ranging from about 43,000 to about 130,000. All counties historically faced challenges recruiting and retaining staff and had long recognized that pooling resources allowed each one to secure the needed capacity while paying for services more efficiently. As a result, the 6-pact shared several positions and services, including an epidemiologist. The group also convened an opioid alliance and substance abuse alliance along with a seventh county.

And yet, the counties needed to further increase their respective capacities in order to best use available resources and positions. As a group, the local health officials had many aspirations regarding a more robust public health system in their region, but individually they lacked the time and funds needed to implement their ideas.

Developing a Council of Governments

The 6-pact embarked on a months-long journey to carefully consider several models that would improve their ability to develop needed capacity. During this time, they each worked with their respective boards of health to get support and buy-in for the overall concept, as well as feedback on legal and operational issues associated with specific arrangements under consideration.

Ultimately the group decided to establish a council of governments(1) as the vehicle to enhance their collaborations. A COG was desirable for several reasons. First, as a body of local governments, it provides more visibility for public health. In addition, it offers a venue to more readily engage in regional collaboration and pursue grant opportunities. Moreover, it provides a single point of access for partners to connect with public health departments across the region, with the potential to draw in partners who are interested in working to impact a population larger than that of any single county in the area. Notes Kimberly Cupp, RS, MPH, Health Commissioner of Fulton County, “The council of governments model maintains the individual identity of each health district while providing collective strength.”

The health officials pursued several grants before successfully winning a local government innovation grant in 2014. The seventh county (that already was participating in the alliances mentioned above) joined the group, and by early 2019 the Public Health Services Council of Ohio (PHSCO) was up and running with its first executive director, Margaret Nashu. The Ohio Department of Health has since provided some additional funds.

When PHSCO was established, five of the member health departments had already achieved accreditation status and one had submitted its application. The initial focus had been on building capacity based on the framework of national accreditation standards, so the group now decided to engage in strategic planning to determine how PHSCO could best serve their interests.

PHSCO members prioritized facilitation as the first capacity to be provided. Coincidentally, Nashu brought strong facilitation skills to the job and soon put them to use in strategic planning and quality improvement efforts.

PHSCO members quickly realized the power of their collective voice. As a group they were able to secure an intern’s hours from neighboring University of Toledo, who provided an analysis of commonalities among the counties’ community health assessments. The analysis provided information that will be used in future grant applications. PHSCO also is involved with the Ohio Alliance for Innovation in Public Health. In addition to benefitting from academic support for regional public health efforts, local health officials also hope the experiences of the intern will ignite student interest in local public health practice and maybe even assist with future recruitment efforts.

In addition to serving the needs of its members, PHSCO also is beginning to explore how it might expand to provide services to non-members.

The process of forming the Council of Governments has opened up doors for increased regional collaboration, grant opportunities and inclusion into new, innovative opportunities.”

PHSCO members cite their long-standing relationships and prior work history as critical to their success. The consensus view is that, although it took several years, PHSCO would not have been established without a rich history of interpersonal relationships and success in prior efforts.

Including boards of health along the way also was an important strategy. Getting their buy-in took some time, but once the decision was made to form a council of governments everything proceeded smoothly.

The new executive director’s job had great potential to be quite daunting, given the region-wide nature of the job. Nashu credits a comprehensive onboarding process that entailed spending time in each health department with providing a solid foundation for her work. Nashu notes, “Once I had met everyone face-to-face, in their space, it was much easier to rely on virtual platforms as the major vehicle for our work.”

¹ “Council of governments” refers to a governance and/or coordinating body working on behalf of local governments.