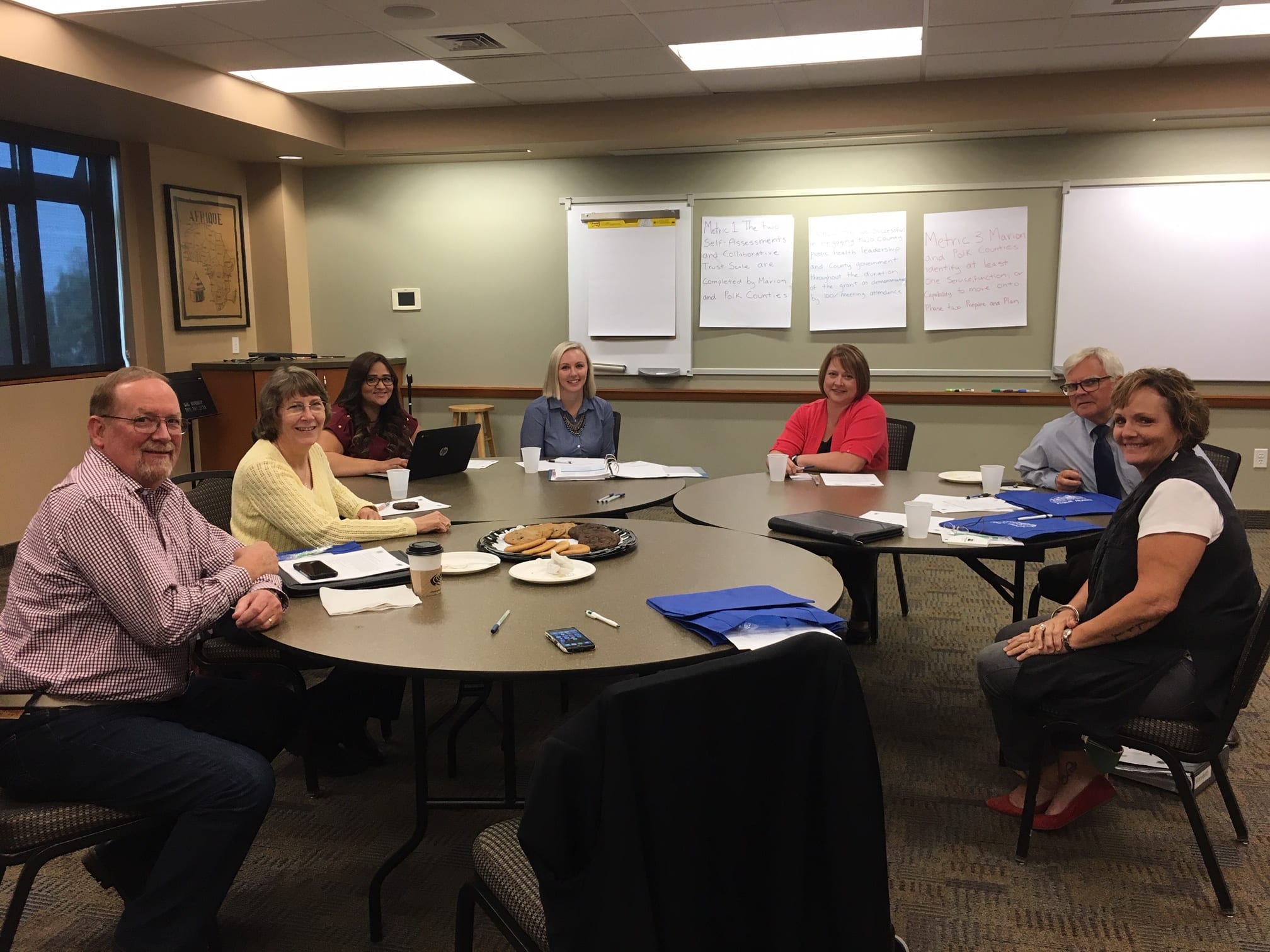 Marion and Polk Counties, collectively spanning about 1,950 square miles, comprise most of Mid-Willamette Valley in Oregon. The state capital, Salem, is located in Marion County and is the county seat. The population of Marion County is around 350,000, which is roughly four times that of Polk County (also part of the Salem metropolitan area). The counties have long relied on collaboration in times of crisis to protect and promote the health of the population they share.

In 2013, the Oregon Health Authority embarked on a public health modernization effort. When cross-jurisdictional sharing emerged as a strategy that could drive transformation, local health officials from both counties felt it was imperative to formalize their partnership out of concern that the state could end up deciding which health departments should partner. They also sought to explore the most effective collaboration models for responding more quickly to urgent staffing needs in times of public health emergencies, as opposed to operating in a reactive mode.

When cross-jurisdictional sharing emerged as a strategy for modernization, the issue for our two counties was not ‘Should we do this?’ but ‘We need to do this.’

Ahead of the Curve

In 2017, with a grant from the Center for Sharing Public Health Services, the local health officials began systematic efforts to build relationships between the two counties, focusing on the county commissioners and the staff from the two health departments. Despite a long history of assisting each other during public health emergencies, these groups did not have much interaction. Using the Center’s Roadmap to Develop Cross-Jurisdictional Sharing Initiatives as a guide, the local health officials facilitated discussions around the questions in Phase One of the Roadmap, which explores conceptual feasibility, to determine if a more formal partnership was possible. They also used the Center’s Cross-Jurisdictional Sharing Agreements Collaborative Trust Scale to identify and address areas that could interfere with trusting relationships.

Soon after Marion and Polk Counties completed Phase One of the Roadmap, the Oregon Health Authority launched its public health modernization plan by issuing a request for proposals for health departments to collaborate on communicable disease prevention and control. The two local health officials in Marion and Polk Counties quickly discovered that, as a result of completing Phase One of the Roadmap, the counties were conceptually aligned regarding how to frame a proposal and they were successful in their bid for a modernization grant from the state.

The new grant funding allowed the local health officials to work on Phases Two and Three of the Roadmap (planning and implementation), which culminated in the development of two intergovernmental agreements between the two counties, one to govern shared services for communicable disease efforts and another to request assistance for public health emergency response.

The communicable disease programs in the counties have been enhanced in several ways:

—   Both counties now use the same job description for communicable disease investigators to facilitate work on joint investigations.

—   Health alerts/advisory notifications are issued in both counties simultaneously.

—   Communication campaigns, such as “Get Yourself Tested” movie ads, play in both Polk and Marion County movie theaters.

Most notably, the health departments now co-lead a Communicable Disease Coalition. Though the counties have identified similar health issues and have the same health care and other community partners, they were not working together to leverage the partners’ contributions and increase their impact. The new coalition provides a more efficient and effective region-wide approach to communicable disease control.

Moreover, collaborating on these issues has led to the consideration of additional opportunities and challenges that could be addressed through cross-jurisdictional sharing. For example, the health departments now co-lead a new Maternal and Child Health Coalition and in the future they may even discuss sharing a health officer.

Securing early commitment and involvement from the Boards of Commissioners was essential to the successful development and execution of the intergovernmental agreements.

Framing the discussion as an effort to benefit the entire region was an important strategy.

Commissioners appreciated that, by working together, the two counties would have a stronger voice with the state health department and potentially with other funders.

The Center’s Collaborative Trust Scale paved the way for open and honest communication when difficult issues were addressed, and that in turn strengthened relationships. Because there has been turnover on both Boards of Commissioners, the local health officials plan to complete the assessment again in the coming months.

Finally, the local health officials valued participating in technical assistance calls with the Center for Sharing Public Health Services as they worked with their boards, particularly when using the Collaborative Trust Scale and developing strategies for moving through the CJS process in general.

Visit our interactive map to learn about this and other CJS initiatives in Oregon.